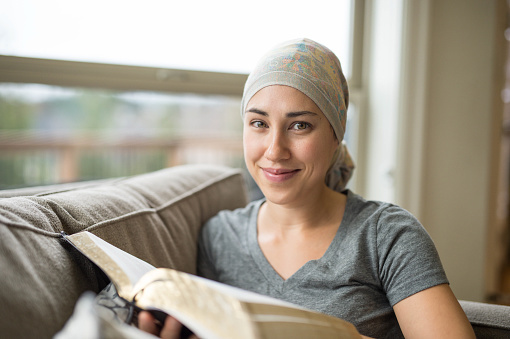 One day we visited the family of a woman named  Valaa*. Her only brother was killed and his car was stolen by an unidentified person. In addition, her two adult sons' shop was destroyed by the explosion of a car that exploded in front of the entrance. One son received threatening calls because of his work for the "Americans", and  had to leave his job out of fear for his life. There was no income and the family decided to immigrate to Kurdistan, where they still live.

Valaa was born into a Protestant Christian family. She knew a lot about Jesus Christ. However, she did not have a personal relationship with Jesus. One day, Valaa found out she had cancer. It was a severe shock, especially since she has small children outside of her adult sons, and they still need their mother's care, so much. Valaa went into her room and asked the Lord to speak to her. The woman opened the Bible and passages from it gave her comfort and peace. She finally turned to God through this!

She soon had to undergo surgery. Before going to the operating room, she told the doctor that God would be with her. Everything was going well and while she was undergoing chemotherapy, she was a blessing to many patients, doctors and staff. This was the beginning of her ministry. She was physically exhausted, but she grew spiritually as the Lord strengthened her.

One day she was watching a Christian program on TV and the host mentioned her own name and her history of illness and suffering. He told her not to be afraid because the Lord healed her for the rest of her days. Exams revealed that to be true- she was healed!She realized how faithful God is, and how this long journey led her to a strong relationship with Him. She decided then to follow God for the rest of her days!

Now she ministers to the sick, prays with them and actively participates in the life of the church.